This site uses first-party technical cookies and, with your consent, third-party analytical and profiling cookies. For information on the use of cookies and the ability to choose which ones to authorize, access the extended information. By continuing to browse by accessing another area of the site or selecting an element of the same (images or links) or by selecting ACCEPT COOKIE, you consent to the use of all cookies. If you do not wish to authorize the use of analysis and profiling cookies, select ESSENTIAL COOKIES for the operation of the site. 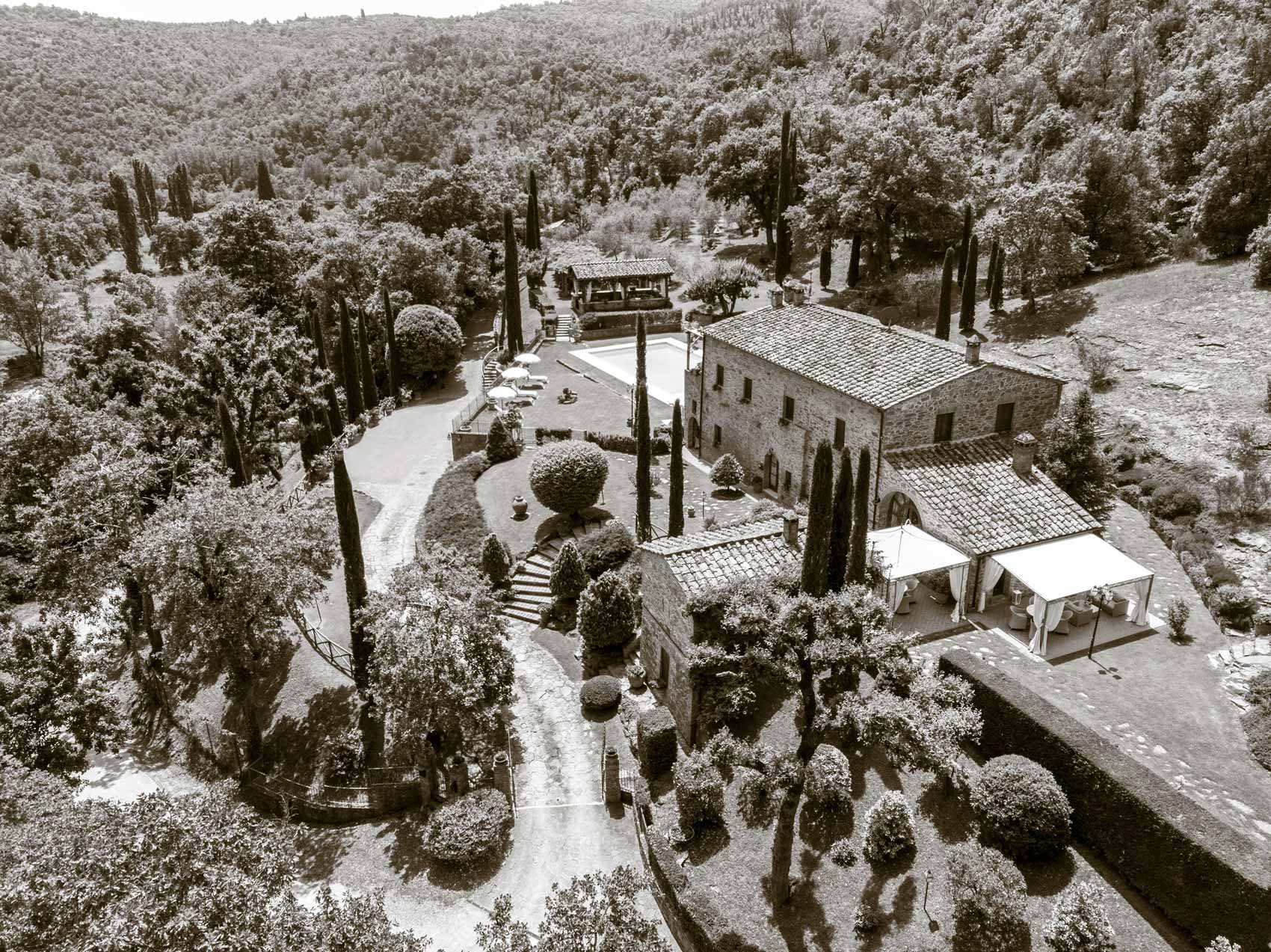 Podere la Casina, also called Maglioli since the end of the eighteenth century, is not far from Rigomagno, towards the west. Its position is quite happy because it is located near the route of the ancient Roman road Cassia-Adrianea. 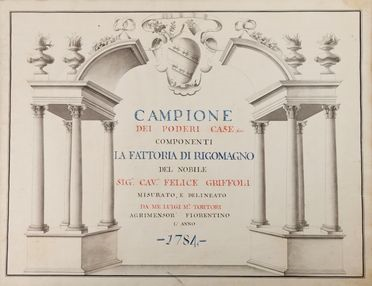 At the moment we cannot attest the existence of the building at that time, although it is known that during the period in which the pax romana reigned, especially in Italy, there were many settlements scattered in the countryside. We know that this important artery passed close to the farm. In the Peutingerian Table, an ancient map of the 3rd century AD where the roads of the Roman Empire are drawn, we find the parish church of Santo Stefano in Vico XII on the route from Chiusi to Siena. Today this small church is incorporated in the farm called Le Pievi, in front of the castle of San Gimignanello, in the Municipality of Rapolano Terme, a few kilometers away from the Casina-Maglioli farm.

The locations near an important road such as the Cassia-Adrianea enjoyed the benefits brought by those who crossed them, as merchants and surveyors. Unfortunately they were also crossed by less welcome categories such as: armies, swindlers and thieves. New religions also travelled through the important arteries. Christianity came to our place precisely through the Cassia. In Campo Muri, near the San Giovanni di Rapolano thermal baths, Christian symbols of the 4th century AD were found in archaeological sites, the century in which the Emperor Constantine the Great, made the Christian religion equal to the others.

In the preparatory tablets of the Estimo del Contado dello Stato di Siena and in the volume of the Estimo di Rigomagno, compiled "in the year of the Lord 1318", although for every single property, whether it was a house, farm or piece of land, there is reported the relative toponym, unfortunately "Casina" is absent. In the 1525 Lira only the owners are indicated but the toponyms have not been written. Unfortunately, at the moment, in the most ancient documents, both medieval and Renaissance, we have not found the farm object of our research.

From the early eighteenth century Felice Griffoli from Lucignano in Valdichiana began to buy farms and plots of land in the court of Rigomagno. In 1724 these properties are assigned not only to Felice but also to his son Francesco. In 1753 they are now transferred to the grandchildren and sons Giacomo and Pietro Griffoli. From these two brothers on November 16, 1770 Francesco Petreni bought some plots of land where we finally find the farm called Casina. This farm from 1776 will return among the properties of the Griffoli house as the Cavalier Felice will buy it back from Petreni himself as seen in the 1778 land registry of Rigomagno, where we find him owner of the following farms: Poggiarello, Vitarero, Gagnoni I and II, Vigna I and II, Casina, Orso, Gambaroni I and II, Maglioli and Casina. Felice Griffoli, after purchasing a fair number of farms and plots of land, in 1784 commissioned Luigi Maria Tortori "Florentine land surveyor" a cabreo or "Champion of farm houses etc. components of the Rigomagno farm”. In addition to the villa and houses, there are twelve farms, among which we also find the one called "Maglioli, or both the Cascina".

From this moment we also speak of "Cascina"; it could appear a kind for Casina but in the "Land registry of the Estimo of Rigomagno in 1797" we find near the farm a "flat lawn with elms and walnuts, called Maglioli and Cascina, square four 9.2.3.4. estimated scudi one hundred forty-seven and four lire ». The Cascina is defined by the Treccani dictionary as a place where "cheese and butter are made".

This change in the name perhaps derives from the fact that in these years the "burraia" could have been built; this is located not far from the farm as it is now called Maglioli or Casina. This underground structure was most likely built in the eighties or nineties of the eighteenth century, and is demonstrated by instructions of the "Architectural treatise by Ferdinando Morozzi, a nobleman of Colle Val D’Elsa”. Morozzi himself dedicates a chapter of his volume, the XVII, called "Della Caciaia, and room for making butter".

I faithfully report Morozzi's description and below I will go and see the connections that exist with the Casina-Maglioli farm butter.

"Everyone knows that fresh is the one that separates the fat from the milk, from the remainder commonly called Panna, or Fior di latte, or Capo latte, and with fresh, and better with very cold water, it is savored, and converted into butter, therefore it is clear that he wants a room, not only located in the north but in that part that looks Maestro, which we call here the Marino, this is perfectly obtained in mountain places, or annexed to the house, or ver disjoint, by making it close to some cool stream, or under some mountain slope in an opaque place, and covered by trees if it can be obtained: this room needs another less internal one, where the path to make the ricotta etc. and all this small factory can be obtained, and in the same house as the farmer, or it can be separated, but not far from the Cascina, or that stable destined for cows, or cows, from which milk is drawn for butters, with caution however, whether there is, or the well, or the cistern, or the source of fresh water, it is convenient. The room then to store the caci, which are extracted from the remaining buttered milk, or those, which are made from sheep and goats, it is enough that it is exposed to Tramontana, and is on the ground, where the heat is most avoided. , which can heat up the cheeses. [...] I will finally add, that if the room for the milk to make butter, being a little hot in the summer, which is why the cream is not well separated, in this case, an underground cellar can be used, with around it a trough, into which water, or cistern, well, or spring according to convenience, is sent through canals, and said trough rises from the ground, braccia 1. ⅓ and above a flower of water is crossed with iron rules, on which the milk jars are placed, half of which remain immersed in water, and thus the degrees of freshness are increased to better spread the milk ».

First of all, Morozzi is concerned with indicating how the burraia was built and where to place it. Certainly in a cool place: a room facing north or better still a cellar in the farmer's house or separate, near some cool stream, on the slopes of a mountain and in a place covered by trees. The burraia of the Casina-Maglioli farm was dug underground (hypogeum), not far from the farm, on the slopes of a hill overlooking it, in a flat place covered by trees with the proximity of a stream. Another important element highlighted by Morozzi to make the butter is the abundance of running water, because it is with cold water that the butter is made firm and formed. The water had to flow inside the butter chamber to cool the milk, especially in summer. Ours is crossed by a trickle of water.

As we have seen, the burraia of the Maglioli or Casina farm faithfully reflects the indications of Ferdinando Morozzi and therefore have corroborated our thesis of its construction date at the end of the eighteenth century. To underline the importance of these very particular and very interesting buildings, the "Sentiero delle Burraie" was created in Tuscany, on the ridge of Monte Giovi (between the plain of Florence and Mugello): an excursion ring that touches the old burraie of the area. The ring was opened in October 2008 and its paths are designated with the initials "SB".

The last relevant element that we find in the description of the land registry of 1797 is the proximity of an important artery that even borders on the farm. This is the description: «A land estate with two farmhouses, word Caprioli and Maglioli, which has the Castagneto ravine as its border at Tramontana; to the east the ravine of Sesoli and the road to Siena; at noon said road and the millstone of the Mulino delle Foci, at Ponente Domenico Luchi with n. 158, 159, and 154, and Pietro Luchi with n. 156 and also includes a piece of land of the Augustinian fathers of Siena with n. 281 and more of the Pieve di Rigomagno n. 291 ".

The Maglioli farm bordered the road that led to Siena. We can see this in the map of the Leopoldine Land registry of the Municipality of Rigomagno, drawn in 1819. We find the road called "Strada delle Vallesi a Siena", but also "road from Siena in Valdichiana". The latter name derives from the fact that the Vallesi road, after passing under the Le Pievi farm, climbed towards San Gimignanello and entered the Lauretana or Valdichiana road. In 1774, after the "agrarian catastrophe" of 1766, due to its importance in bringing food from the fertile Valdichiana to the city of Siena, this road was elevated to Strada Regia thanks to the Grand Duke of Tuscany Pietro Leopoldo Habsburg Lorraine. This road is also called Lauretana because it was also travelled by pilgrims who, after passing Ponte a Valiano, crossed the Regia Aretina road that continued to Perugia, Macerata and Camerino, finally reaching the Santa Casa of Loreto.

Concluding our journey through time, in order to know better this pleasant place, immersed in the luxuriant Sienese countryside, called the Maglioli farm, we cannot help but wonder about the toponym «Maglioli" and what this word derives from. This term is not found in today's dictionaries, we have to consult a few that are no longer used. In the Great Dictionary of the Italian Language Utet, Vol. IX, p. 457 we find: Magliòlo (magliuòlo, maiòlo), sm. Vine cutting, consisting of a one-year-old shoot to which a two-year-old piece of wood is left. A word related to the vine and wine. In the already mentioned land registry of 1797 near the Maglioli farm we find several plots of land with vineyards so the toponym could derive precisely from this crop.

The word Maglioli has also been mentioned by very illustrious people in their various writings. Beginning with the fourteenth-century prose by L. de 'Bardi: